“Before You Say ‘No’, Please Listen To What I Have To Say.”

It happened one evening in the Bronx. 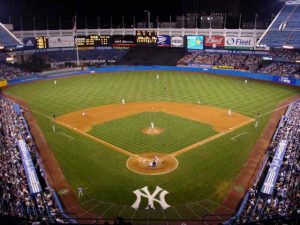 I was attending a NY Yankee game with my wife and her boss along with his wife and five other family members. We were the guests of George Steinbrenner – but that is another story.

I was standing there minding my own business when before I knew what hit me, I was holding a bag of M&M Peanuts in my hand while being a couple of bucks light in the wallet.  Here is how this story unfolded:

As the crowd meandered about, we waited for the gates to open so we could enter “The House” a guy named Ruth built, (a pretty nice ball park, steeped in history where you get the privilege to taste the most expensive hot dog known to mankind)

Out of nowhere, a woman approached our group carrying a bag of something and opened with the line, ‘Now before you say no, please listen to what I have to say.’

‘Here we go!’ I remember saying to myself soft enough so nobody could hear me. I saw her flash some form of ID while mentioning something about her daughter and a basketball … or maybe it was a basketball team.

Her exact words didn’t matter at the time. All I knew was that I was being confronted by a New York street huckster in the Bronx, out in front of Ruth’s digs. And faster than a knee-high fast ball I, along with a number of others, was $2 short.

In what affectionately is called “a New York minute,” everyone in our group was munching away on various colors of M&M Peanuts sung to the tune of 18 cents a nut, while visions of $7 hot dogs danced in our heads.

How’d she do that?  This was the perfect example of the famous New York City street-corner shell game unfolding right before one’s hesitant eyes…. but with a different form of shell.

That last question was a rhetorical one as I knew exactly how I became the proud owner of a bag of M&M Peanuts. Six things happened in what probably was a well-rehearsed sequence.

I watched her ‘work the crowd’ and I saw quite a few people ripping open yellow bags of nuts in her wake. Daughter or no daughter, round ball or not, the gal had a fine-tuned gig on a pretty profitable sales route.

This week’s message is going to catch you off balance. No, it is not about the dangers of entering the Bronx with a Peanut Jones. Nor is it about the power of a well-oiled sales presentation. And I will save you the rhetoric about assaulting one’s ’emotions’ for another Monday.

Today, I want to remind you of the power of the smile. I am certain that the only reason I purchased that 2-buck bag of M&M’s was directly related to #3 above ….that woman’s smile. It was just a pretty cool smile. (Don’t go off on any soap opera tangent on me … remember my wife was standing right there next to me.)

You want to have a pretty cool week? Show more people your pretty cool smile. That’s it. That is all I have to say this week. You know the rest. Get out there and smile more. Not the ear-to-ear fake grin like the News Anchors throw at us every night. A sincere ice-breaker …  letting your audience know that you are glad to be exactly where you are and doing exactly what you are doing.

The Yankees lost to Baltimore that night, but the M&M’s tasted good and the hot dog was out of this world. Not being a Yankee fan, I must admit they do have a pretty cool stadium. Ruth done good. I wonder if that woman’s daughter ever won her basketball game?

PS. You want info about my Inner Circle Sales & Marketing Club, send me an email.
mike@mikemarchev.com

Big Ideas: Watch your tone Someone once told me[...]